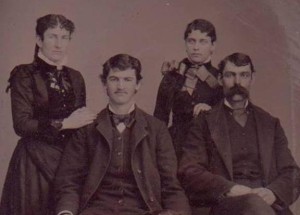 Some of you may have heard of Ron Pastore from the popular History Channel program, Jesse James Hidden Treasure. He is also the author of Jesse James’ Secret and the Jesse James Forensic Report. Pastore’s next project is to release his personal collection of original, never before seen photos of Frank & Jesse James and their family members.

Pastore has been researching Jesse James for over 10 years and has become recognized as an expert on the topic. With the release of the rather extensive photo collection, there is further irrefutable evidence supporting his findings.

Pastore suspected that Jesse James had faked his death in 1882 to elude authorities and lived to be 88 years old in remote SE Kansas. Further research and explorations soon revealed that the theory was true. Armed with this exclusive information, a plan was conceived to produce a documentary. In 2003, the first program aired on the History Channel, Investigating History/The Jesse James Mystery.

Pastore also set out to prove his theory in academic circles. In 2004, he was the featured final speaker at the annual conference of the American Academy of Forensic Science. He presented a methodology for crime labs to employ as a new national standard. By uniformly using the same criteria in our Nation’s crime labs, the evidence handling would be less in question. Pastore subjected his own research into the Jesse James murder case to these criteria. At the conclusion, the audience of forensic scientists gave a resounding ovation for his presentation.

Pastore’s AAFS presentation was the basis for his second book about the empirical evidence in the case, namely the Jesse James Forensic Analysis. The book is available in early release as an ebook at: http://jessejamesforensics.com

Jesse Woodson James was a well-known Confederate guerilla fighter, Southern spy, special agent of the Knights of the Golden Circle and its various Masonic splinter groups. After the Civil War he was shot by Federal troops attempting to surrender under a flag of truce. After recovering, he went deeper underground and commenced a 17 year crime spree that allegedly ended with his assassination in 1882.

Pastore’s investigation revealed that the 1882 plot was a ruse wherein a cousin was murdered in his place. This ruse gave Jesse total anonymity to engage in any criminal conspiracy or espionage he chose.

Pastore’s quest to find the long missing photos of Jesse and his family began many years ago. He had purchased some old tintype photos at an antique shop on a research trip to St. Joseph, MO. Several weeks after his return home he decided to examine them closer. His first impression was that the images looked a bit like Frank and Jesse James. But it was hard to fathom how they would have wound up in a St. Joe antique shop.

The image was sent to a facial recognition software expert for analysis. The results of the test came back positive and the photo was feature on the History Channel program. It was fortunate for the analysis that Jesse sat in the exact same pose as his known teenage photo in rebel attire.

“I was thrilled to learn I had found an original photo of Jesse James. So I decided to search for more photos and stopped at every small town antiques shop I ran across in my travels. Over the years I was able to locate dozens of images in dusty boxes of discarded memories.”

Some have called the collection nothing less than a national treasure. Of course there will be doubters and naysayers, but that is the burden anyone trying to break new ground no matter the field. What is hard to refute about this collection is the fact that they depict many of the James family members and they are seem together and in group photos. One should also keep in mind that Jesse was a wanted man and frequently changed his appearance to conceal his identity.

“Jesse had several unique facial characteristics which help to get a positive ID on him. He had inherited several features from his mother and father, Robert and Zerelda James. The first thing you notice is the mismatched slope of his shoulders. The shape of the head, hairline and jaw line also stand out. His ears are another marker to focus on and are mismatched as well. Jesse’s nose enlarges over the years but his bigger right nostril is often visible. When the hand is shown we can see the arching fan shape of the fingers with a rather short pinky finger. But more than any other feature are Jesse’s piercing eyes. The right eyelid drapes diagonally across the pupil. And the left eyelid droops across the outer edge of his eye. It would be possible for two people to share one or two of these feature. But for two people to have more than three commonalities is beyond a mathematical improbability.”

Pastore plans to have as many of the photos authenticated as possible. But the fact that there are so many depicting the same people tends to make them self authenticating. “Considering the overall population of the USA in the post Civil War era and the number of folks that could even afford to have one photograph taken in their lifetime and then consider how many pictures have survived until today. The odds of this many photos of the same subjects being anyone other than James family members are highly doubtful. It is in essence the reverse scenario from typical authentication. One would have to accept them as credible in the absence to evidence to the contrary. Take for example the photo of Zerelda and Reuben seated outside their James Farm home below. It clearly shows the couple prior to 1871, unquestionably.”

We shall see how the public received Pastore’s collection. But if it is anything like his previous findings and his documentaries it is sure to become a very popular website. And just what’s next for Pastore?

“I feel inspired to put together a new book as a pictorial essay on Jesse and his family for my next book. It will be entitled The Jesse James Photo Album, as well. This is clearly a national treasure and needs to be shared.”

One of Jesse’s CDV photos will be sold in Chicago on April 5, 2012. Auction estimates for the single photo are $20,000.00 to $30,000.00. That was the case last summer when a photo of Billy the Kid wound up being sold for $2.3 million. We understand that Pastore may sell a few of his photos in order to raise funds to support the website and publish his next book. Check out the website for yourself at: http://jessejamesphotoalbum.com

This site uses Akismet to reduce spam. Learn how your comment data is processed.