Robert Sallee James was one of five brothers from Kentucky. They settled around the country and raised large families. Robert married Zerelda Cole and they traveled to Missouri and started a family. The watch case locket she is wearing contains photos of herself and Robert. The locket was handed down to Jesse’s wife, which can be seen in Martha’s later photos. 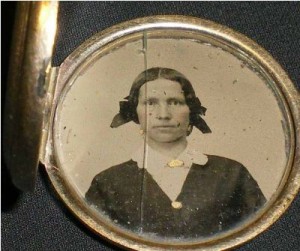 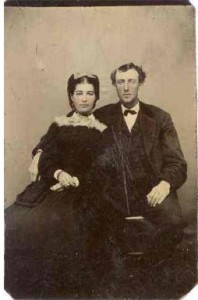 Legend says Robert  died in 1851 shortly after arriving in California. This could be the last photo taken of Robert with his sons. Holding ones lapel with the left hand is a secret sign for Knights of the Golden Circle members. 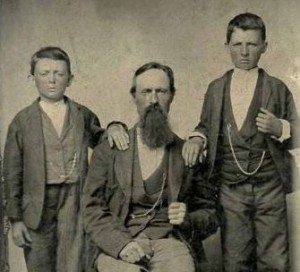 Of course, no story is complete without delving in to the non-traditional side of the James’ of Neodesha, KS. The two photos below are from the personal legacy of Jere Miah James, who was in fact the real Jesse Woodson James. These two photos were in Jesse’s belongings discovered in trunks hidden in his daughter Daisy’s closet. The photos both date long after 1851, when Robert allegedly died in California. 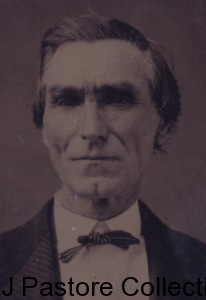 If there is any truth to J. Frank Dalton’s version of history, then these are the last images of Robert Sallee James. According to Dalton, Robert was seeking a way out of his marriage to Zerelda. So he made a trip to see his brother in Paso Robles, CA and faked his death.

In light of the fact that California was a hotbed of KGC activity in through the 1840-50’s, it is interesting to note Robert’s traveling party.
Robert Sallee James – JJ father.
William Woods – age 30, 1st cousin to the James and Younger’s. They lived in Clay Co. Mo, near James farm.
Dan Showalter, who later became a Colonel in the Confederate Army.
Merriman Little, later won a seat in the California Assembly as a Douglas Democrat, siding with the South.
Robert’s brother, Drury Woodson James was a wealthy Spa owner near San Francisco.

Robert returned to Kearney, MO to pick up the young Miss Sara Mulkey and started a new family, in Mulvane, Kansas. They had two children and Robert is buried next to Jesse (Jere Miah James) in Neodesha, under the name of Robert Restored James. 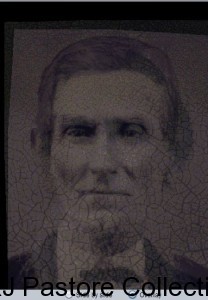 When the two images of Robert James are overlaid for comparison, the facial features align perfectly. Is it possible that Robert set up his disappearance with the help of his brother in California? For the love of a younger woman, one might think so.

Obviously, Robert’s death was a ruse and he is really buried with Jesse at the Ross Cemetery near Neodesha, KS as Robert Restored James.