Stand By for Breaking News!

It comes now to light as of 9/12/20, that certain parties have engaged in activities that are far outside the bounds of legal, ethical and moral conduct. These parties will be named below and a transcript of the investigation will be detailed in full on the link below.

(The document is Privately published on this site. It will be publicly released asap…)

The RJ Pastore Collection reveals an amazing story about Jesse James and his look alike cousins who all went by the same names. They documented their lives in photographs, leaving solid evidence that Jesse faked his death and outsmarted the law.

But they did more than pull off a clever ruse to fake Jesse’s death. They were all part of a grander plan as agents of the Masonic-like order, the Knights of the Golden Circle. After the Civil War, the KGC conspired to seize power by infiltrating the USA government.

It takes a lot to change history regarding the conspiracy that was perpetrated by the outlaw band. One has to ask, what good is served if the facts are false. Especially when the truth is so much more compelling and rich in character.

J. Frank Dalton told his version of history in the matter of the death of Jesse James. He stated that the James gang assembled 52 men to pull off the perfect ruse by creating and executing their own cover story. They brought in their own lawman from 3 counties away, who then deputized two James gang members. 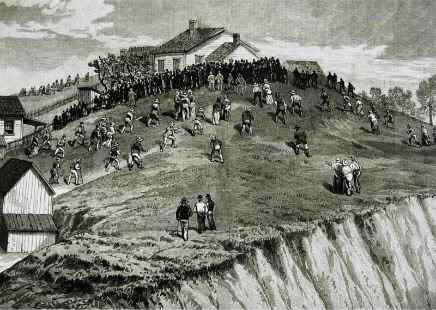 They took control of the crime scene, took custody of the corpse and all of the evidence, brought in their chosen assistant coroner, and a single chosen reporter, all within about an hour of the killing. The autopsy evidence and the coroner’s inquest clearly contradicted the perpetrators story, yet the murder went down in history as the conspirators claimed. 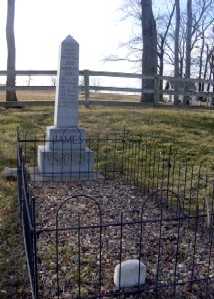 Within a few days, the body was safely buried on the James farm before anyone could question anything further. A quick and splendid cover-up of a state sponsored murder, of quite another color. If it was a ruse, then who was really killed?

One fine fiction was fabricated by the James Gang that day in 1882 and the cover story has stayed in place ever since.

But now you can see the truth for yourself.

There are three main schools of thought regarding the legendary life and death of Jesse Woodson James.

Traditional history states that Jesse W. James was killed in 1882. An unfitting and unlikely end of a legend.

The 2nd theory says Jesse assumed the identity of a cousin, Jeremiah “Jesse” Mason James who was actually murdered in his place. Even though the victim had an obvious birth defect to the top rim of his ear among other differences that sets him apart from Jesse W. James, they managed to pass the body off as Jesse.

The 3rd theory claims the Outlaw legend belongs to J. Frank Dalton who lived to age 104. Dalton stated he had 72 aliases, but his real name was Jesse Robert James, 1st cousin to Jesse Woodson James. He maintained his claim to his death in 1951. 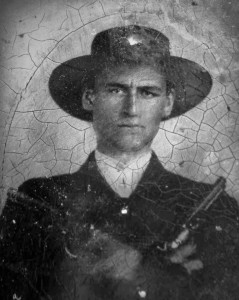 Genealogy records show Robert Sallee James’ brother, George James had a son named Robert Woodson James. He went by the name Jesse Robert James, as one of many aliases he used in his lifetime. Read more… http://jessejamesphotoalbum.com/jesse-r-james/

What comes to light within the RJ Pastore Collection is that it takes all three men to compose a legend the size of Jesse James. Together, they formed a criminal syndicate that acquired millions of dollars in stolen loot. Some was hidden away, some was spent on living large and most was invested in ventured that advanced the cause of the KGC.

The three men posing together intimately below are the same three men seen above, individually. This proves what RJ Pastore discovered in his forensic investigation of the 1882 killing of Jesse James in St. Joseph, Missouri. The murder victim was the cousin seated to the left, Jesse Mason James, alias Tom Howard. 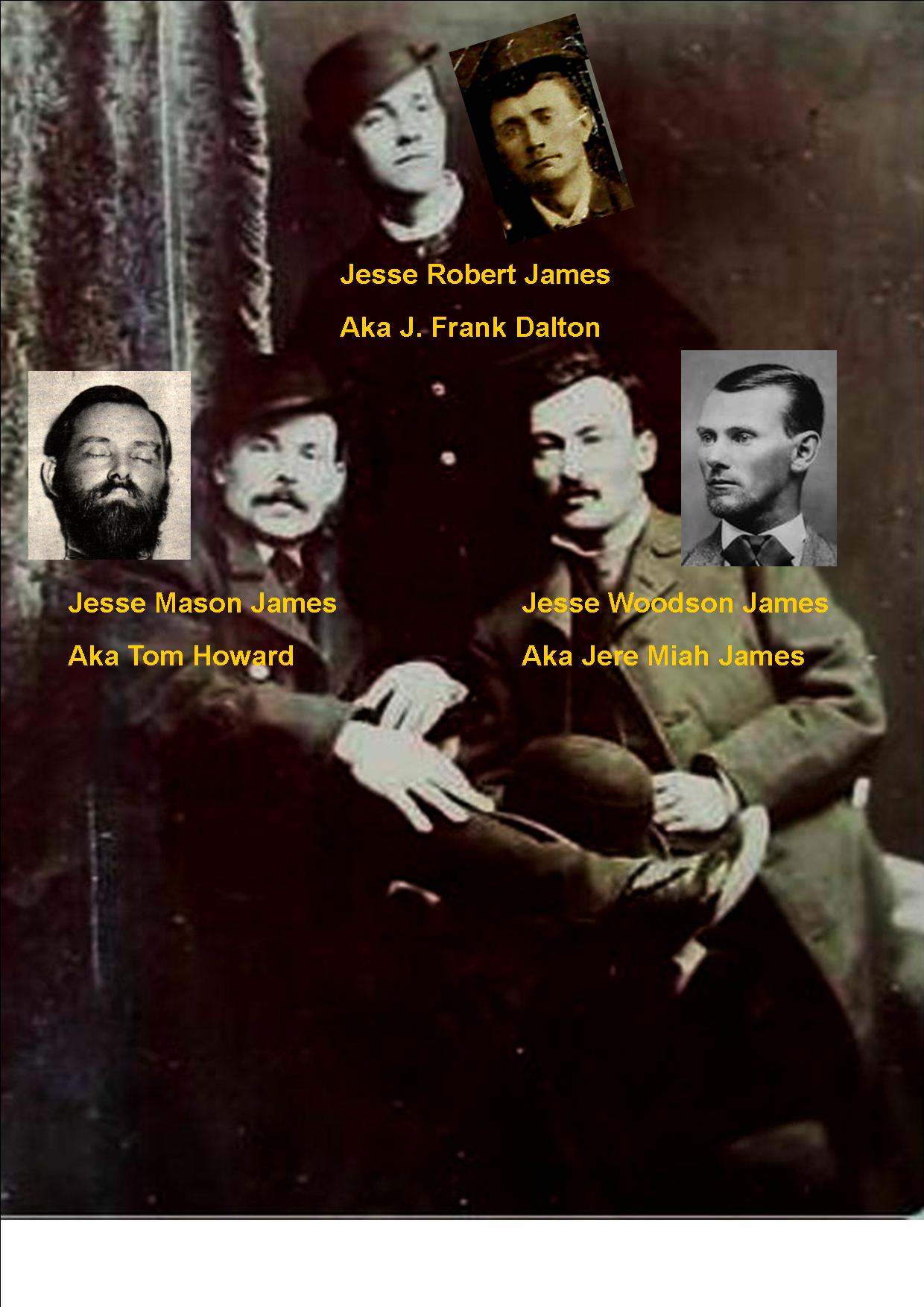 Three of a Kind

The stunning photo below features all three Jesse James’ with their brothers all named Frank, standing behind them, all together in one group portrait.

The sample head shots of the known persons are inserted next to the named subject in the photo for easy comparison. The original photo itself is unedited. The men are seated together, verifying their individual identity and their affiliation to one another.

The possibility of six other random men, matching these six subjects and also being connected to a famous figure like Jesse James is impossible. How could these six unique characters all be perfectly duplicated a second time over, to be anyone else?

Consider the hypothesis: The three Jesse’s so closely resemble each other that they conspired to combine their lives in to a single persona, Jesse James.

Jesse Woodson James is either the man matching the dead man photo on the left (JMJ), or the living photo match to the man on the right (JWJ), he can’t be both. Therefore, the real Jesse (JWJ) must be the living photo matched to the man seated on the right. This proves once and for all, Jesse W. James was not killed in 1882. It was his cousin, the man on the left (JMJ) who got the starring role of the dead man.

It is beyond the realm of possibility for anything other than to accept the amazing revelation, that there were three sets of Frank & Jesse James.

Historian RJ Pastore has compiled an amazing collection of Jesse James related photos. What’s more astounding is that Pastore located many other James family, fellow gang members and other outlaw photos as well. Below is a rare image of the James-Younger Gang all together in one sitting. Click on the Younger Brother’s menu below to view more incredible images of these famous outlaws.

The photos were acquired by painstakingly searching antique shops and small town curios all across the country. They were purchased in complete albums, groupings and from the estate sales of family members and collectors. Many of the photographs authenticate themselves because the subjects are seen together with other family and Gang members.

Pastore’s investigative analysis has elevated and expanded the genre of Jesse James. His research has brought new life to what was a sad, grim tale with a duplicitous end. What emerges in these photographs is a spectacular story of  intrigue, adventure and an underlying love story that lasts into their old age.

Until now, only a few images of Jesse James were known to exist and owning one was unheard of. Serious collectors wishing to acquire an original, one of a kind photo can make contact below.

Original photos on this website are the exclusive copyright of Ronald J. Pastore ©1998-2018. All Rights Reserved,