Marking another milestone of record visitor traffic, now at 75,000 hits.

Here’s an excerpt from the the J. Frank Dalton page. Just added an note about the stand off at the depot. 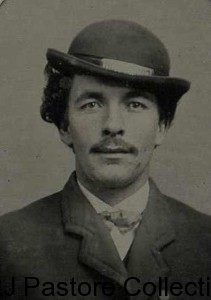 There was an armed standoff  at the train depot between Sheriff Timberlake and detectives from Kansas City. The Sheriff and deputized James Gang members were moving the body to Kearney, against the orders of the Governor and DA. The Detectives were vastly outnumbered and the conductor walked up and said, “Now take it easy boys, no need to pull your pops out here”. It was enough for cooler heads to prevail, and the James Gang left with the body.

A coincidence that Dalton had a photo taken in his conductor’s hat, perhaps.

This site uses Akismet to reduce spam. Learn how your comment data is processed.