The many names and faces of Jesse James

Among the finds are a few extra special photos Jesse signed under his alias at the time.

See more on facial recognition and handwriting analysis on Jesse James at http://jessejamesforensics.com

Pictured below are photos sign David Zartman on the left and John T. Nicholson on the right. However, all three are the same man, Jesse W. James 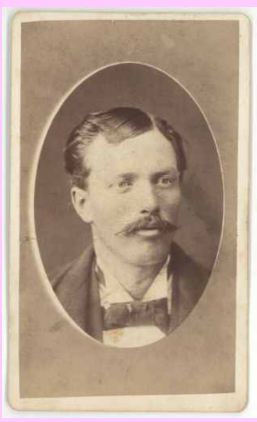 Jesse and his gang were Masters of Disguise often blending in as cattleman, ranchers, horse racers and successful businessmen.  In spite of his wide spread fame, Jesse had the uncanny ability to hide in plain sight. He had many aliases and often changed his identity along with his appearance. It seems Jesse & Frank were no strangers to the photo studio and frequently sent their pictures to family and friends.

The James Gang flourished for 17 years before that fateful day of April 3rd, 1882. Jesse was reportedly shot at point blank range, in his own home by his cousin Bob Ford. And so the legend ends on the most notorious outlaw of all time. Or does it? Pastore claims the Jesse faked his death to elude capture and actually outwitted the law.

Pastore made two documentaries about his findings with the History Channel. All of the evidence supporting Pastore’s thesis is thoroughly documented in the Jesse James Forensic Analysis.  The 128 page report is available online at: http://jessejamesforensics.com

If a picture is worth 1000 words, then what are a lifetime of photos worth?

Clearly, the answer is … priceless!

Thanks for stoppin’ by, y’all.

Notice: The photos on this site have been cropped and image adjusted for presentation.